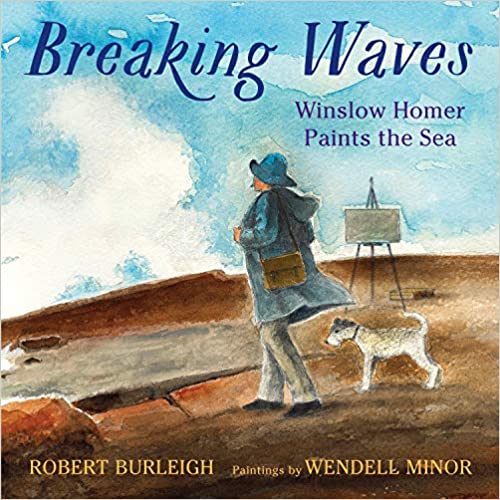 Whenever we think of #ocean, we recall #waves and #shells. Almost everyone who visits the sea can lick the salty spray of the waves from their lips or fingers if they linger long enough on the #beach. That and a bit of sand, and perhaps some memories in the #sun, are what everyone takes back home. However, an #artist looking over the vast #ocean might see more than the water, waves, or sand. The visiting card of the sea. Their eye might discern the short-lived play of #light that delights a keen observer. Their #heart might capture the #moods of the ocean. And that gradually moves to their hands which are now primed to express their #experience with the sea.

A visit to the beach always reminds me of my aunt, an artist. As we all raced over the sands and dove into the waves, she stood aside, watching the whole scene. She stood still, gathering everything that came her way. It seemed that she was soaking it into her being. Sometimes, many months later, she would produce a sketch or a painting of an odd wave or a striking moment that was stunning. When I received a copy of the book on Winslow Homer, I was captivated by the author and the painter. That week I learned so much about Winslow Homer on the internet. I am so delighted to share an interview with Robert Burleigh about the process he followed for the book Breaking Waves: Winslow Homer Paints the Sea.

Winslow Homer was a print maker, traveler, and an artist. What aspects of his art fascinated you to make art as the subject of this biographical retelling?

I find the fact that Homer spent so much time on Prouts Neck exciting and rather odd at the same time, so I wanted to weave the story around his time(s) there. In middle age, he left a fairly vibrant social and artistic scene to live in this hermetic way and concentrate nearly entirely on painting (he did have visitors and some family members were often living nearby, but he was quite isolated much of the time). Many creative people look for quiet, offbeat spots to work, but this seems to be an extreme (and from a creative standpoint amazingly successful, since the paintings he created are wonderful) case.

There are so many fascinating aspects of the sea. Please explain the process you went through to focus on ocean waves in Winslow Homer’s paintings.

I have always loved large water spaces, so perhaps that gave me a connection with Homer’s obsession. I grew up very near Lake Michigan, in Chicago, and currently live near the same lake — on the Michigan side.  And though it’s not an ocean, Lake Michigan often displays large, dramatic waves, and for many years I’ve often watched the movement and changes in the water surfaces over time. So writing about Homer’s wave and water scenes and sightings seemed very natural to me.

The narrative begins with Splash! Seas spray flying up into mist! Look! and ends with Look! bringing the focus back on the painting. Tell us about the narrative plan you arrived at to share Homer’s journey and your writing process to capture the nuances of painting the Atlantic Ocean.

I usually look for some kind of overview structure for a book, when I’m first considering it. And taking a “seasons approach” seemed to me a good way to organize the book, since this allowed me to highlight the many different moods of the ocean at different times of the year. And of course, “looking” was what Winslow loved to do! It was his way in, the door, to his process. I wanted to connect the two kinds of looking: looking at the sea and looking at the painting. Between the two is the process of Homer translating what he saw in the world into art. This process fascinates me.

I wish I knew more about that! Homer was rather secretive and private about how he made his work. He worked from pencil sketches to paint application, which itself was usually worked over several times before the painting was “finished’.  He also often carried water colors with him on his daily walks, and sometimes made fast and loose water color sketches while out in the natural world. And some of these, of course, became the basis of his larger works.

Homer was recognized as a successful artist before he began to paint water and waves. Why and how did the paintings of the waves make him a powerful artist of repute?

In the early part of career, many of his subjects were assigned to him by magazine and newspaper editors, and he worked as an illustrator (very well-respected) for many years. His reputation as an artist was excellent and he was highly skilled at portraying a number of subjects, but until he moved to Prouts Neck he never achieved the profundity most “great” art has. It’s as if he finally allowed himself to pursue his passion, which led to these wonderful attempts to capture the constantly moving and changing ocean. Of course, the subject of the sea has always fascinated people – the sea in its many moods and variations.

What was the biggest surprise for you as you researched for this book?

I was surprised that I was so inspired by Homer’s dedication, discipline, and passion for his work. This has stayed with me as a mantra: the best work is deep and real and true. Homer’s life at Prouts Neck exemplifies that.

Any other information you wish to share with our readers.

I hope this book provides a good starting point to learn more about both Winslow Homer and the importance of art in our lives. I’d like any readers to better understand art-making and artists. I hope the book says to anyone who feels the pull to create: “GO FOR IT!”

From #Smoky to #Sustainable: Future of train journeys in India